A cervical disc arthroplasty (CDA, a.k.a. cervical artificial disc or disc replacement) is a surgical procedure used to treated degenerative disc disease (DDD) in the cervical spine. In contrast to the more commonly performed anterior cervical discectomy and fusion (ACDF), a CDA preserves motion between two vertebral bodies after the disc is removed.  This preservation of motion is thought to prevent adjacent segment degeneration (ASD, see What is Adjacent Segment Degeneration?) seen after some spinal fusion procedures. 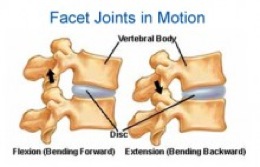 FIgure 1: A spinal motion segment in flexion and extension. The facet joints are indicated by the black arrows. (Source: http://www.spineinfo.co.uk/anatomy-of-the-spine/)

Recall that in an ACDF (see What is an ACDF? Part I and Part II) a degenerated or herniated IVD is removed and a spacer is inserted in its place.  Over time the body will grow bone across the spacer thereby joining, or fusing, the two vertebral bodies together to immobilize the diseased motion segment.  This alters the local biomechanics of the spine and may place more strain on the motion segment above or below thereby causing more rapid degeneration of that segment, i.e. ASD.  The initial steps of a CDA are identical to those of an ACDF: the spine is exposed via an incision on the front of the neck and a discectomy (removal of the disc) is performed to decompress a pinched nerve or the spinal cord (see radiculopathy and myelopathy.)  The key difference between CDA and ACDF is the type of device inserted into the disc space after the discectomy.  Rather than a spacer and bone graft (and sometimes a plate), the surgeon inserts a special device that bends and rotates around an axis of rotation (see figure 2 and video). This device allows for movement at the motion segment that mimics the natural motion afforded by a healthy IVD (hence the term “artificial disc.”) The hope is that if we preserve the motion of the segment we avoid altering the biomechanics of the spine and thus decrease the incidence of ASD.  It’s a great idea in theory but what does the literature say about CDA? 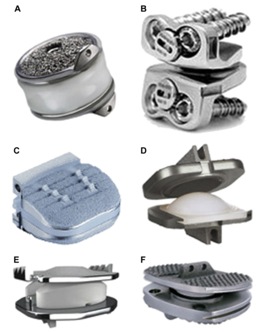 Video: One type of CDA device (Nuvasive PCM) in motion.

First, the data clearly demonstrates that CDA is at least as safe and effective as ACDF (arguably the most successful surgical procedure we do in neurosurgery.)  The data is less clear about differences in rates of ASD in patients who undergo CDA versus ACDF.  This is mainly because a) the rates of ASD are generally low for either ACDF or CDA (around 3% per year), and b) it can take years for ASD to develop.  If you combine these factors you need thousands of patients and many years of data collection to begin to detect a difference in rates of ASD between patients who undergo CDA versus ACDF.  Thus the data can be murky.  One large Cochrane review of 9 studies with 2400 patients showed no difference is ASD rates at 2-years (Boselie et al, 2013).  A review of the 7-year data on the Medtronic Prestige CDA device, however, showed a 7-year rate of ASD of 4.6% in CDA patients versus 11.9% for ACDF patients (Burkus et al, 2014). One must view this data with caution, though, because of potential conflict of interest:  the study was written and edited by scientists paid by the Medtronic Corporation and the lead author Dr. Kenneth Burkus is listed as a paid consultant for Medtronic.  Indeed a large review of 74 randomized controlled trials of CDA versus ACDF found significant conflict of interest in the majority of trials on the subject.  When the authors eliminated trials with conflict of interest they found no difference in rates of ASD in CDA versus ACDF (Alvin et al, 2014).  Despite not showing a statistically significant difference in rates of ASD for CDA versus ACDF, most studies show a trend towards improved rates of ASD for CDA.  Most authors believe that a few more years of data should settle the debate. For what it’s worth, I personally believe that CDA does prevent ASD when compared to ACDF.

CDA isn’t for every patient.  The ideal patient for CDA in my mind is a young patient with an otherwise healthy spine who has radiculopathy or myelopathy from an acute disc herniation (i.e. one of the young Marines I see from Camp Lejeune).  I would NOT use CDA in an older patient with multiple severely degenerated discs or severe cervical spondylosis.  While my indications for CDA are typically narrow, more and more surgeons are expanding their indications for CDA (including treating multiple degenerated discs) with excellent outcomes.

Thanks for reading.  Merry Christmas and Happy New Year!