As I discussed in my last post, when patients read their MRI reports they often become fixated on and perhaps even hysterical about certain terms within the report.  One group of terms that gets patients stirred up like no other pertains to the health of the intervertebral disc (IVD): is the disc bulging, herniated or ruptured? 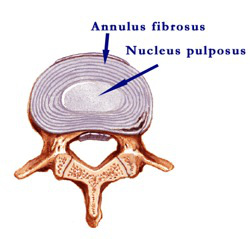 First, a herniated disc is the same as a ruptured disc.  For matters of simplicity, I will only use the term “herniated” from this point on in the post.  There are subtle differences between a bulging and a herniated disc as I’ll discuss below.  Ultimately the semantics may not be important as both can cause pain, numbness or weakness when they compress a nearby nerve root. Before we talk about herniated discs, let’s review the anatomy of an IVD (this has also been discussed in a previous post.  The IVD is composed to two primary parts: the inner nucleus pulposus (NP) and the outer annulus fibrosus (AF).  The NP has a soft, gooey consistency (one of my professors in D.C. told patients that it’s like a piece of crab meat and to this day I hesitate for a second before eating a crabcake.)  The AF is taut and strong because of is multiple wound fibrous layers (see figure 1).    As the IVD degenerates the NP loses water content and thus loses its elasticity.  Also, the layers of the AF start to weaken and can begin to develop focal points of weakness called annular tears.  Under repetitive mechanical loads the concentric structure of the IVD is lost and part of the NP begins to escape through damaged layers of AF.  In the cases where the NP is still contained the AF can begin to bulge (the bulging disc.)  In itself, this bulge isn’t problematic unless the bulge becomes prominent enough to start to press on the nerve passing by.  In other cases the annulus rips open and allows a piece of NP to burst out (the ruptured or herniated disc, see figure 2.)  It’s not clear why some patients develop only bulging discs while others completely blow out their NP.  Perhaps these patients are just at different points along the spectrum of degenerative disc disease (DDD)?  On the other hand, I’ve seen several teenage patients with large disc herniations.  Clearly these young patients didn’t progress along the path of AF-weakening DDD prior to herniating a piece of NP.  These unfortunate patients must have some genetic predisposition to more rapid degeneration of the IVD.

Figure 2: Illustration of herniation of nucleus pulpous (NP) through tear in the annulus fibrosus (AF.)  The herniation causes severe pressure on the nearby nerve root (pink arrow.)

Sometimes a patient can recall lifting something heavy or twisting awkwardly to trigger the disc herniation (these cases almost always involve twisting or bending while carrying a heavy load.)  More commonly, though, the patient just wakes up with leg pain and can’t recall any inciting event that caused the disc herniation.   If this herniation (or bulge) is substantial enough to compress a nearby nerve the patient develops a radiculopathy or nerve root injury.  Usually this is associated with severe pain and perhaps numbness in part of the leg.  In more severe cases the patient may also experience weakness of the muscles supplied by the injured nerve (i.e. a foot drop caused by an L4/5 disc herniation.)  Each nerve root supplies fairly standard muscle groups and sensory distributions in the leg so your surgeon should have an idea of where your problem disc is based on where you say your pain is.  An MRI is usually done to confirm the location of the disc herniation or bulge (see figure 3.) 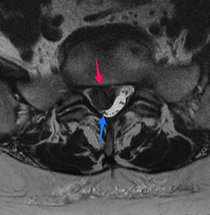 Figure 3: Sagittal (left) and axial MRI images illustrating large disc herniation at L5/S1.  Note the large free fragment of NP occupying more than half the diameter of the spinal canal (pink arrow.)  Note how the traversing nerves are being crushed by the fragment (blue arrow.)

In the vast majority of cases the disc bulge or fragment makes contact with the nerve passing by en route to exiting the spine at the level below (the so-called traversing nerve root.)  This is why a disc herniation at the L4/5 level usually affects the L5 nerve.  In rare cases the piece of disc will herniate in a location on the side of the IVD outside of the spinal canal (a far-lateral disc herniation).  This herniation will affect the exiting nerve root as it exits the spine within the neural foramen (these are also sometimes referred to as foraminal herniations.)  So for a far-lateral L4/5 herniation the nerve that is affected is the L4 nerve.  This may not seem like that big of a deal but don’t tell that to a patient with a far-lateral herniation.  These are typically much more painful than standard herniations because the herniated fragment usually compresses part of the nerve called the ganglion, an important connection center for the nerve that is exquisitely sensitive.  These patients are often crying when I enter the room to meet them.

The initial treatment for a patient with a herniated disc and radiculopathy should include rest, anti-inflammatories, physical therapy and even epidural steroid injections.  These modalities help provide temporary relief while the body heals itself.  Eventually, with time (and it can take a year or more), the patient will begin to feel better. A common misconception among patients is that the piece of herniated disc “goes back into place” within the IVD.  This isn’t true.  Rather, the body reabsorbs the piece of herniated disc and thus alleviates the pressure on the nerve.  If this doesn’t happen or if the patient desires more rapid relief of his pain, surgery may be considered.  In our next post we’ll discuss the lumbar discectomy, the surgery done to remove a bulging or herniated disc.